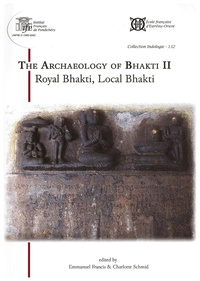 This volume is the fruit of the second workshop-cum-conference on the Archaeology of Bhakti, which took place from 31st July to 13th August 2013 in the Pondicherry Centre of the Ecole française dExtrême-Orient. Royal Bhakti, Local Bhakti was the topic of this scholarly encounter and is the central theme of the present volume, which attempts to clarify the roles of kings, local elites and devotional communities in the development of Bhakti. When we look at the monuments that are the material traces of Bhakti, we expect kings and their immediate relatives to have played a key role in producing them. But temples commissioned by ruling kings are in fact relatively rare : most sacred sites resonate with the voices of many different patrons responsible for commissioning the buildings or supporting the worship conducted there. Queens, princes, palace women, courtiers, local elites, Brahmin assemblies, merchant communities, and local individuals all contributed to the dynamism of Bhakti. Far from downplaying the importance of kings as patrons, this volume explores the interactions between these different agents. Do they represent independent and separate streams of Bhakti ? Or is there a continuum from large-scale royal temples to locally designed ones ? What is the royal share in the development of a Bhakti deeply rooted in a specific place ? And what is the local one ? How did each respond to the other ? Was the patronage by members of royal courts, especially women, of the same nature as that of ruling kings ? After an introduction by the editors, fifteen scholars address such issues by examining the textual foundations of Bhakti, the use of Bhakti by royal figures, the roles of artists and performers, the mediation of queens between the royal and local spheres, and the power of sacred places. The volume concludes with an afterword by Richard H. Davis.

The Archaeology of Bhakti II Royal Bhakti, Local Bhakti book. Read reviews from world’s largest community for readers. This volume is the fruit of the se New - Publications